If you are looking for a quick way to interconnect your various applications then Node-RED may be the low code option you've been looking for. Node-RED began its life as a way of putting together Internet Of Things applications, modeling systems as a flow of events which entered through an input node, passed through processing nodes, and eventually arrived at an output node or nodes.

For example, an MQTT event could arrive through an MQTT node, be passed through some processing nodes, and be output as a new record in a database or forwarded to another messaging system. If that sounds complex, Node-RED visualizes these flows as an interactive graph you can manipulate.

But enough about Node-RED, you can install it and try it locally yourself. We're here today to show you how to launch Node-RED on Fly. And in the process, how to refine an application on Fly for best fit.

The first thing to do is to install Node-RED locally, as there are some command-line operations we'll need later.

The simplest way to get up and running with Node-RED on Fly is to use the nodered/node-red docker image. You can do this in one line:

The port is set to 1880 because that's the default port for Node-RED to communicate on. Take a note of where the application says it will initially deploy to too.

We can deploy this app right now with:

and we can open the app with:

Thanks to Fly's edge network, your connection will be upgraded automatically to HTTPS and you'll be talking to Node-RED. Or at least observing this warning:

What that error is about is that the /data directory in the Node-RED image doesn't have isn't writable. We need to give our application a writable, persistent storage space, which is where Fly volumes come in. We can create a volume, local to our application, and get Fly to mount it on /data. First step in that process is to create a volume with a name:

That region setting comes from when we inited the app earlier; it was going to deploy in lhr, so we've made the volume in lhr. The second part of this process is to tell the app about this new volume. For that we edit the fly.toml file and where we see:

we add, after it:

This tells Fly that the volume named node_red_data should be mounted on the /data directory. With that in place, we can fly deploy and fly open our app. There's no warning and Node-RED flows are safe over redeploys.

There's only one problem...

You may have noticed that there's no password authentication when we connect to Node-RED. There is an option to turn it on in the Node-RED settings.js file, but that file is notionally on the /data volume. How can we get a file there with our settings?

Let's get the settings.js file first. You can find the default settings file in the Node-Red repository. Download that and save it as settings.js.

Next, we take control of the build process.

Switching to a Dockerfile

This is where Fly's flexibility comes into play. We can switch deployment from just deploying an image to using a Dockerfile to create our own image. We'll create a Dockerfile to reproduce what we're currently doing first:

And then tell Fly to use the Dockerfile by removing the [build] instruction from fly.toml, deleting or commenting out the part that reads:

If we now run fly deploy you'll see this instruction being run and the app deploy as it previously did.

When images startup, they have a command to be run and its that command we want to take over. The Node-RED image calls npm to start the Node-RED service like so:

We'll add this command to the end of a short script which will copy our settings.js file over to /data/ before we start up Node-RED. This can all go in a script called entrypoint.sh.

But wait! How did settings.js get there and how are we going to run this script? Back to our Dockerfile, to ask it to do that work. Let's add this to the Dockerfile and:

So, step by step:

Two little details to know: One is that the Node-RED Docker image switches to a node-red user as its last act, which is why we do the user switcheroo. The other is that yes, if our script was already executable, then it would be executable in the image. But just in case, and because invisible effects are invisible, we explicitly set the script to executable.

Now we can fly deploy and fly open the app again.

And everything is exactly the same! Which isn't surprising because we haven't changed the settings.js file so it's all still running of defaults.

Open up the settings.js file and find the "Securing Node-RED" section. You'll see an example of what we need to add immediatly below that: it's an adminAuth object.

Add to the file a section that should look like this:

This will create us an admin user, but now we need to generate a hashed version of the password. If you installed Node-Red at the start of this example, it'll be easy. Just run node-red admin hash-pw and enter your password when prompted. It'll return a string which you should copy in where hashedpassword appears above.

Now we can fly deploy and fly open and be greeted with: 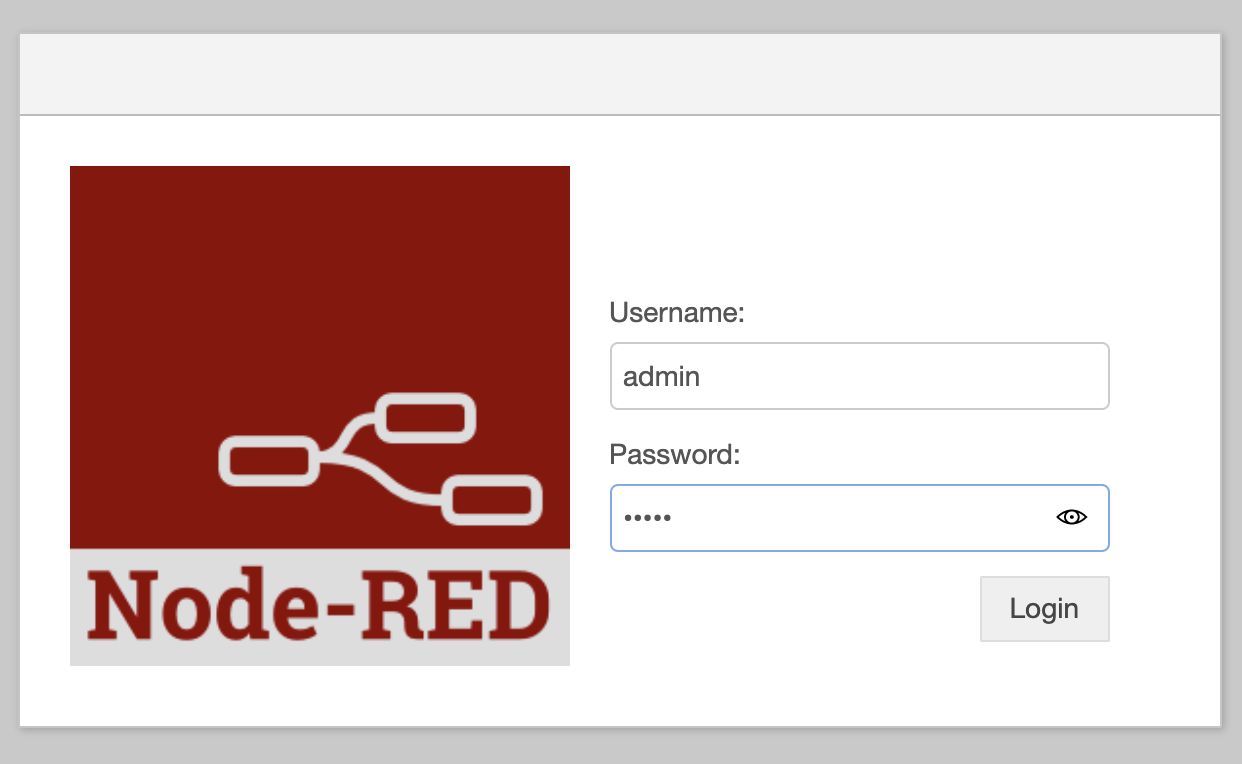 Now we can login as admin and the password we set and we've secured access to our Node-RED.

We've put together a deployable Node-RED image for Fly. In the process, we've seen how we can take control of existing images and supplement their build process to add in functionality, and how we can use scripts to take over the startup of an image to make modifications we want in place.

For Node-RED administration, editing the setting.js file locally and deploying will update our installed settings, so you can explore all the optional controls. For Node-RED usage, think of it as a graphically configurable glue layer within your system. You can install many of the third party nodes available and plug into many more applications and platforms.